The private equity titans behind 3G Capital Inc. and their families are taking advantage of distressed real estate prices in Brazil, where the economy has been battered by Covid-19 and the botched government response.

Firms linked to billionaires Jorge Paulo Lemann, Marcel Telles and Carlos Alberto Sicupira are increasing bets on strip malls, office space and long-term rental apartments. The goal is to seize opportunities created by the pandemic in a nation that’s leading the world in daily Covid deaths.

“The next 18 months will be very challenging for commercial real estate and that’s the time to make purchases, because sellers tend to get more flexible on prices,” said Fabio Itikawa, chief financial officer of Sao Carlos Empreendimentos e Participacoes SA, which was created by the 3G founders and is now owned by their heirs.

Brazil is suffering its worst phase of the pandemic, with more than 340,000 dead from the disease and records being broken daily for the number of new cases. Vaccinations are progressing slowly, with only 10% of its 212 million inhabitants having received their first shot and just 2.9% fully immunized, according to data compiled by Bloomberg. The forecast for shipments of new doses was recently cut. The economy is struggling as some activities are in lock-down with rising unemployment and dwindling growth.

The malaise though is presenting possibilities for Sao Carlos, which specializes in buying, refurbishing and reselling office space.

In February, it announced the acquisition of three floors of the Morumbi Office Tower in Sao Paulo’s Chacara Santo Antonio neighborhood for 44 million reais ($7.8 million). The seller was a wealthy family struggling with vacant space and unhappy tenants asking for rent discounts, Itikawa said, declining to identify the owner.

Sao Carlos also announced a deal to buy a strip mall in the city of Cotia for 33 million reais.

Their strategy is to revamp the space and attract tenants like drugstores, banks, supermarkets and other essential-services businesses that are remaining open during the worst of the pandemic, he said. While large shopping centers are closed, Sao Carlos’s open-air strip malls posted a 12% increase in sales last year, Itikawa said.

The firm has about 700 million reais available for additional purchases, including cash and debt, Itikawa said.

Commercial real estate prices in Sao Paulo rose 0.65% in the 12 months ended in February, according to the FipeZap Index, compared with 5.2% inflation for the same period.

“When the market is doing badly is when you get the best opportunities,” Itikawa said.

Lemann, Telles and Sicupira hold a combined fortune of about $44 billlion, according to the Bloomberg Billionaires Index. They’re most widely known for striking some of the biggest consumer-brand deals, with stakes in Anheuser-Busch InBev NV, the world’s largest brewer, and Restaurant Brands International, the company behind Burger King.

The three are among the world’s wealthy who have been buying up lower-priced assets as the pandemic has upended industries globally. U.K. brothers Simon and David Reuben have snapped up hotels recently in New York and Venice, while the property unit of Thailand’s richest man, Charoen Sirivadhanabhakdi, has said it plans to acquire distressed hotels in that country, betting on a quick revival in tourism once the Southeast Asian nation reopens to foreign visitors.

The 3G founders’ real estate assets can be traced to Lojas Americanas SA, the Brazilian retailer they’ve owned for more than four decades. Sao Carlos was originally created to manage the company’s stores before later turning its focus to office space.

“We started in 2015 and our plan was to grow through green field projects in order to have more control over the maintenance fee for the condominium,” said Carolina Burg, one of JFL’s co-founders and partners.

But when recessions in 2015 and 2016 created buying opportunities, the company shifted gears and started acquiring some already constructed buildings.

JFL’s rental apartments are furnished and aimed at the well-off, offering services such as house cleaning, maintenance, tax payments and even breakfast with monthly rents ranging from 7,800 reais to 53,000 reais. While the pandemic reduced demand from executives who were working from home and traveling less, the firm was able to offset vacancies with longer contracts from people seeking bigger houses, she said.

JFL has bought two properties in Sao Paulo this year, one in the Jardins neighborhood, where it will construct a pair of buildings, and another on General Mena Barreto Street close to Ibirapuera, the city’s biggest park. The company is negotiating for four other buildings and has 600 million to 1 billion reais to invest this year, Burg said.

JFL’s real estate portfolio will be worth about 2.5 billion reais when all the buildings are ready, she estimated.

“There’s a lot of room to grow, but we want to seek attractive returns,” Burg said. “We need to be careful, because with low interest rates there are a lot more buyers competing with us in the residential real estate market, and some things are being sold at absurd prices.” 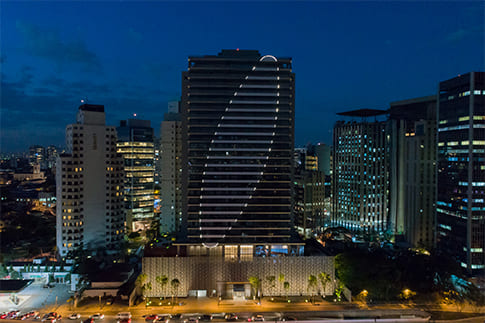